The treatment of kidney stones is determined by a urologist, who will consider a number of factors before making a decision to decide if a patient is suitable for lithotripsy treatment, including the size, shape, composition and position of the stone.

If the stone is small, you may be able to pass it with minimal intervention. This can be achieved by increasing water intake, possibly combined with pain relief and medication which helps to dilate the ureter (the tube between the kidney and the bladder).

Medium sized stones may be suitable for lithotripsy or removal during a ureteroscopy procedure.

A ureteroscopy procedure uses a ureter scope (a tiny light source and camera inserted into the urethra to the bladder) which can be manoeuvred up the ureter to locate the stone. The urologist will use special tools to take hold of the stones and remove them carefully.

If the stone is large a Percutaneous Nephrolithotomy may be required. This is a procedure where a small incision is made in the patient’s back to get direct access to the kidney, allowing removal of the stone. This is performed under general anaesthesia and requires you to stay in hospital for two to three days post-procedure. 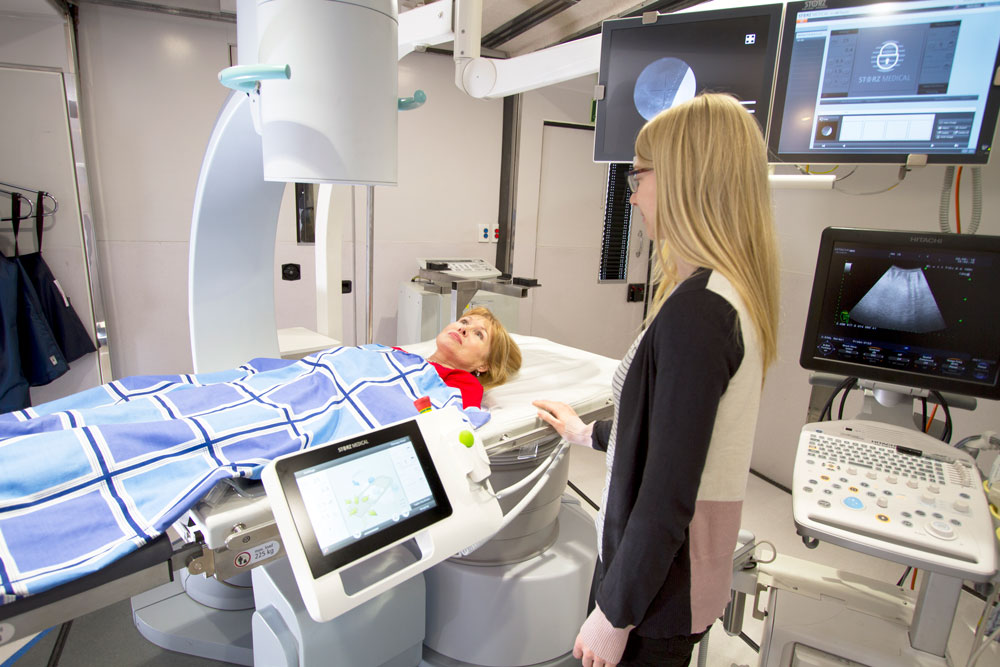 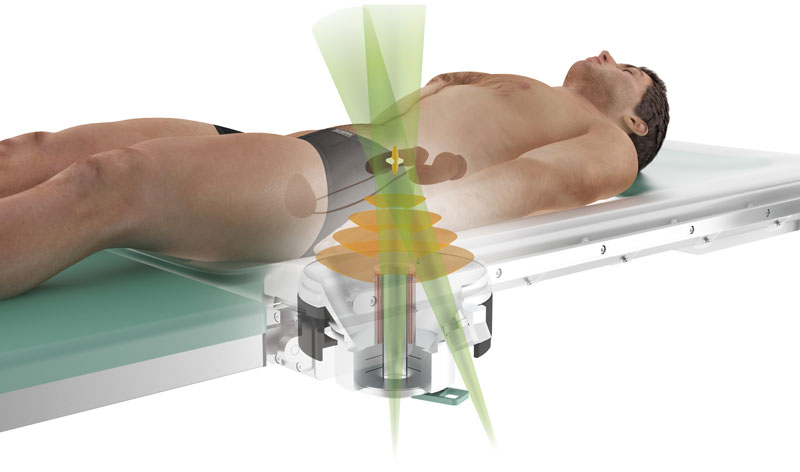 A kidney stone breaks up when the force of the shockwaves overcome the tensile strength of the stone. As the sound wave hits the stone, several processes occur which aid in fragmentation.

Compression, tensile forces, and cavitation are effects that are thought to contribute most to stone fragmentation. When a shockwave is propagated through a medium (i.e. fat or muscle), it loses very little energy until it crosses into a medium with a different density. If the medium is denser, compressive forces are produced on the new medium. Similarly, if the new medium is less dense, tensile stress is produced on the first medium. Upon hitting the surface of a stone, the change in density creates a compressive force, causing fragmentation. As the wave continues to travel through the stone to exit at the back, the change back from a high density to a lower density tissue reflects part of the shockwave’s energy, producing tensile forces, which again disrupt and fragment the stone.

In cavitation, shockwave energy applied at a focal point leads to a failure of the fluid in a tissue surrounding the stone causing the generation of water-vapour bubbles. These gaseous bubbles collapse explosively, releasing their energy as a micro-jet that fracture and erode the calculus (stone).

Some patients may have medical conditions which rule out lithotripsy treatment as an option, including urosepsis, uncorrected bleeding disorders, pregnancy and aortic aneurysm. Other factors a urologist considers when deciding a patient’s suitability for lithotripsy is patient body habitus, renal malformations, renal insufficiency, complex intrarenal drainage systems and other patient medical factors. 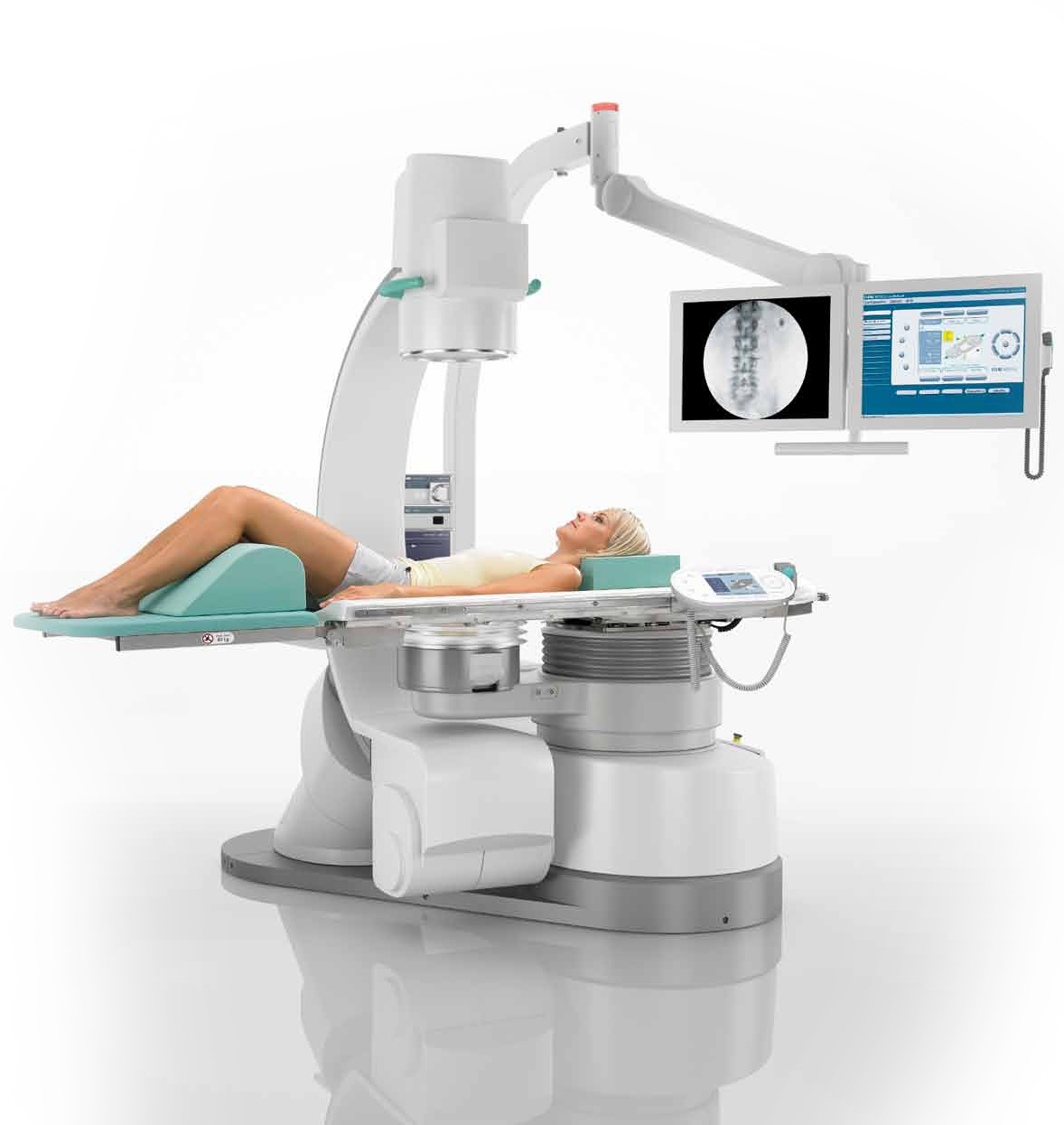 The development of ESWL

Claude Dornier’s research into pitting on the surface of fighter aircraft as they approached the sound barrier was the unlikely beginning of lithotripsy as we know it today. The pitting was found to be caused by a shock wave created in front of a droplet of moisture at these high speeds.

The Dornier HM3 (developed from a machine that was originally designed to test supersonic aircraft parts), was the first shockwave lithotripter introduced in the United States. There are still a number of these machines in operation. The design of the HM3 is based on an electrohydraulic shockwave generator. The shockwaves are focussed via an ellipsoid metal water-filled tub in which both the patient and the generator are submerged. This system uses x-ray fluoroscopy for stone targeting and localisation. Although very effective due to the large focal area of the shockwave, having a patient anaesthetised while in a tub of water is not ideal. It also had a greater possibility of damaging surrounding body tissue. The efficacy of the HM3 is still the standard to which other lithotripters are compared.

Second generation lithotripters moved away from the electrohydraulic model and into piezoelectric or electromagnetic generators. These systems have focussing devices incorporated into the system, allowing for smaller focal zones. These allow for more accurate targeting of the stones and less damage to surrounding tissue. A draw back of the decrease in focal size occurs during patient respiration. The motion of the diaphragm during breathing moves the abdominal organs, resulting in movement of the kidney and stone. For some kidney stones this may be enough to move them out of the focal zone temporarily, meaning some of the shock waves will miss their target.

The coupling device in a second-generation lithotripter is a silicone-encased water cushion that is positioned against the patient’s side. A coupling medium is used between the surface of the therapy head and the skin surface to allow for good transmission of the shockwave. This removes the need for the patient to be submerged in water.

The newest generation lithotripters offer greater portability and adaptability. These usually provide dual imaging options with both x-ray and ultrasound imaging capabilities. This means that stones previously not visible on x-ray due to their composition can be targeted with ultrasound, greatly increasing the number of patients suitable for lithotripsy treatment.